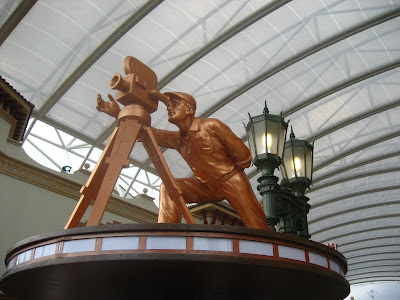 At just 20 hectares, Universal Studios Singapore is the smallest of Universal's theme parks (less than half the size of either of the Universal Orlando theme parks, and even smaller that Disney's California Adventure), but it is loaded with 20 attractions in this compact park. It is made up of 7 distinct lands, each with a theme related to movies.

To get into the park, you would have to walk under the Universal Studios Singapore archway, and I tell you, that archway is grand. It is the most unique of all of the Universal Studios archways. It is a rather neat to actually see the monorail pass above your head , above the entry turnstiles. Once inside the park, you will walk below a replica of the Hollywood sign. The Hollywood main street, looks a bit like the Hollywood section of Universal Studios Florida, except covered with a huge, translucent canopy, to keep tropical rainstorms at bay. And it is short. Very short, but very immersive, probably one of the more immersive lands.

When I first walk down the Hollywood boulevard, it was like drinking from a water hose. The sights, the sounds, and yes, even the smells hit you the moment you walk into the park. Once you pass under the Hollywood sign, it is like entering a whole new world. The area music is playing, which is very evocative of the golden age of Hollywood. The smell of the popcorn car on the boulevard also hits you. There are even meet and greet characters such as Kung Fu Panda, Woody etc. By the time I got over this sensory overload, I started to run up and down the street, trying to take in all of it.

At the sides of the street, there were authentically recreated facades that captures some of the iconic buildings of the LA area. That includes the five and dime shop, the dark room, and even the brown derby. One the side walks, there were also names on them, recreating the walk of fame.

At the end of the Hollywood "zone" lies the park's lagoon, from which you can see each of the other park zones surrounding it. I noticed what looked to me like pyrotechnic equipment mounted in the lagoon, so does it mean that there will be any fireworks show when it officially opens? We will wait and see.