Revenge of the Mummy Compare and Contrast 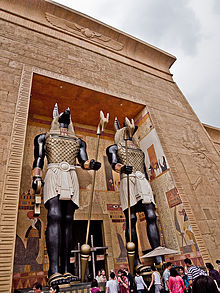 This post will deal with the comparison of the 3 incarnations of the Mummy ride in Singapore, Orlando and Hollywood. Check out the previous post for a detailed description of the Singapore incarnation of the ride.

The Universal Studios Singapore, Universal Studios Hollywood and Florida versions of Revenge of the Mummy are essentially the same. They both incorporate dark ride and roller coaster elements to immerse riders in the sinister world of Imhotep and his mummy minions. But there are some subtle and not-so-subtle differences.
Mostly, the differences have to do with real estate. In the Singapore version, the soundstage was built from scratch, while in the USH and USO version, it occupied the E.T. and Kongfrontation soundstages, respectively. The USH and USO soundstages occupy different footprints, while the USS version have an exact duplicate of the USO version. Orlando's and Singapore's larger width, depth, and height allow for a larger, longer ride. The Singapore version also have the advantage of an entire theme land dedicated to the Mummy theme, and since it was built 6 years after the original in USO was built, it also have the advantage of feedback and experience, allowing them to tweak some of the major story and queue elements.

Revenge of the Mummy Review 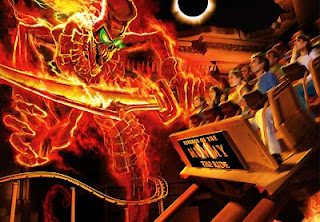 Revenge of the Mummy, one of the best attractions in the whole of Universal Studios Singapore

The Revenge of the Mummy, located in the spectacular tomb in Ancient Egypt, is an indoor psychological roller coaster thrill ride.

Will you be able to handle it?
The coaster part of Revenge of the Mummy does not have any inversions, does not do to any uncomfortable speeds, and reaches a relatively tame max speed of 45 mph. RWS even considers it a "family" attraction and it's less intense than Battle Star Galactica Coasters. But it does include high-speed launches, delivers some startling drops and out-of-your-seat airtime, and feels a lot more out of control because it is in the dark. Be prepared for a more aggressive ride. There will be moments where you feel that you will drop out of your seats, and some "uncontrollable" turns in the dark. There are also steep drops, but still still can be managed. The Linear Induction launch is an aggressive part of the ride, and it launches you straight into a fog filled room, so for those sensitive to fog, you may need to consider it twice. There is a backwards section to the ride too, but it is short, and more fun than intense.

On the "psychological" side of the thrill equation, I think just about everybody, save highly impressionable young children, will find the mummy motif more engrossing than gross-out. The sound effects will be loud, and there will be strobe lights and pyrotechnic effects (real flame).
If you're on the line, I'd advise you to suck it up, hold on tightly to the rider next to you and give it a try. Revenge of the Mummy is among the very attractions in USS, and you should try it at least once. Even if you find the ride a bit too unsettling, you'll be able to take comfort in its short duration; the whole experience lasts about three minutes, with the coaster portion taking less than half that time.

Note
Follow the safety guidelines and do not bring a camera to film the ride. The camera will fly out!
Great Ideas, Great Technology The attraction's high concept, melding a special-effects laden dark ride with a thrilling coaster, is a remarkable theme park achievement. While there are other examples of indoor coasters that attempt to incorporate a story, nothing comes close to Revenge of the Mummy. The introduction of magnetically launched coaster systems provided the linchpin to make the hybrid ride possible. The Mummy's conveyance system, which uses linear induction motors, or LIMs, allows the ride to blast off like a coaster. The real breakthrough is a modified, slower version of the LIMs (called SLIMs) that transport the vehicles through the dark ride parts of the attraction. The technology allows the car to vary its speed through scenes, seamlessly transition from the dark ride to the coaster, and even travel backwards at one point.

Ride Experience
The journey begins as you enter the huge Egyptian tomb located in the Egypt section of the park. The story for this portion of the park goes like this: It is in the 1930s, the golden age of Egyptian exploration. A group of archeologists are excavating this spectacular tomb when something horribly wrong happened. The mummy in the tomb has gone back to life and you are trapped in it too.
While in the queue (which is positively enormous, think: marathon length, and can accommodate a slew of riders on peak attendance days), tabloids show messages like this "Find the book of the living and destroy Imhotep" . There are some pretty spectacular statues and drawings in the queue too, so you may want to take some time to check it out.
The core of the queue winds around a burial chamber and an archaeological dig. In the center is an enormous Egyptian statue that sits above a freshly unearthed keystone.

So the story of the entire attraction is that you need to find the book of the living to destroy Imhotep before he can destroy you.

The queue eventually leads guests up to the second level where they board the ride.
The 16-passenger single-car vehicles look nothing like coaster trains. Made to resemble industrial carts, they are articulated in the middle to accommodate the ride's twists and turns. The loading area actually have two platforms so as to double the capacity of the attraction.
In the first scene, words like "Find the book. Destroy Imhotep" are written all over the walls, and a ghostly voice beckons.
In the second scene a slightly mummified archeologist tells us once again to find the book of the living in order to get out. This scene is made to resemble the altar in the Mummy movies where Imhotep sucks the life out of victims in order to grow into a more human form. An imposing and highly fluid Mummy animatronic character turns around sucks the life out of the archeologist. He turns to the riders and says, "With your souls, I will rule for all eternity." As the word eternity reverberates around the corner, the vehicle moves out of there and into the next chamber.
Behind an altar, the Mummy appears as a large sand face. He makes an offer: "Join me and savor the riches of a thousand dynasties." A treasure trove of gold and jewels appears on either side of the train. "Or refuse and suffer a more bitter treasure." The room darkens, and animated warrior mummies pop out of troughs on either side of the train. Braziers on the altar burst into flames. The vehicle moves toward a huge stone wall that's descending and threatens lock the passengers in side the room for eternity. At the last moment, the vehicle makes a little coaster-like dip under the wall, and makes a turn into the next scene.

The vehicle speeds around a corner and crashes into a wall. The wall cracks and scarab beetles pour from the wall and invade the car as the lights fade to black. This effect is heightened through the use of sound effects although I think Universal could have upped the psyche-out fear quotient here if it had employed those calf-level tickling devices it uses in Shrek 4-D, which is just a simple string connected to a motor under the seat, which creates a tickling effect when spun.
This is where the ride gets serious. While the invading bugs distract the passengers, the track behind the car switches. The vehicle proceeds backwards, but instead of retracing its course, it makes a straight, steep drop into a turntable.
As the car turns 180 degrees, a the Mummy's voice taunts guests. "Your end will be my beginning", "with your souls I shall rule for all eternity". Visions of skeletons appear around this circular room. Facing a giant Mummy head, and launches 45 degrees uphill into the Mummy's fog filled mouth. There are some wild drops, ejector air, and moments of weightlessness that make for a giddy and nerve-wracking out of your seat turns. Fly-by apparitions help create the illusion of even greater speed, although they are too quick to be distinguished by guests.
As you start to feel dizzy, the vehicle stops in front of the book of the living, the book that you have been looking for all this while. Then the Mummy pops out from behind the book and curses the guests, before flames erupt from the ceiling. These are real flames and you can basically feel the heat from them.
The vehicle goes into a sharp drop and into a fog filled room, where it goes into the second coaster portion. There are a few more turns and then the vehicle goes into the last scene.
Trapped
In this last scene, Imhotep is trapped inside a coffin and he curses and taunts the riders from inside. The vehicle then goes into the unloading station.
Overall, the ride is an impressive one, and the psychological aspect of the ride really adds to the appeal of the ride. Ride it more than once to catch the details!
Posted by Yilun at 9:47 PM 6 comments: