Madagascar a Crate Adventure and Revenge of the Mummy are two marquee attractions in Universal Studios Singapore.

Jump on my Yilun Audio Tours podcast and you'll be able to ride these two attractions with commentaries throughout the ride!

It is a great way for you to experience Madagascar a Crate Adventure, a completely unique attraction, only found in Singapore, as well as check out the differences in Revenge of the Mummy from the two US versions.

iTunes link
Subscribe on iTunes
RSS feed
Posted by Yilun at 12:10 AM No comments:

If you guys are wondering why I have been offline lately, it is because I have been working on another project, closely related to two of my loves - travel and Singapore.
Introducing the Yilun Audio Tours
This is a podcast where I bring you through some of Singapore's best sights and cultures and explore how you can make the most out of your visit to Singapore. That podcast's reviews and audio tours can make touring Singapore much easier.
There are currently 3 episodes available, one is an audio tour of Singapore River, one of City Hall, and another is a review of Singapore's food, Laksa.
I really think that you guys will enjoy the content. The link to the podcast blog is yiluntours.blogspot.com, and you can find it on iTunes too by searching Yilun tours. I hope you can subscribe to the show and leave comments.
Cheerios!
Posted by Yilun at 8:38 PM No comments: 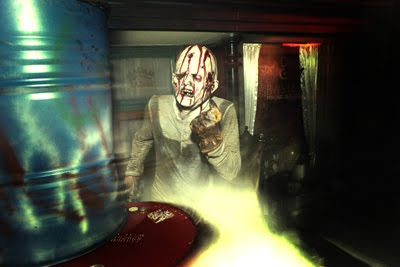 This is part three of the review of Halloween Horror Nights in Universal Studios Singapore.
Pestilence
Scare Factor 4.5/5
Production quality 3.5/5
Overall Show 4/5
Located in the streets of New York and the waterfront area, Pestilence packs lots of scares in this small compact area. This scare-zone is highly unique, and resembles more of an outdoor haunted maze than a scare zone per se. This follows the story of how a contagious zombie-making virus has entered the slum area of New York.

This zone has a really compact layout, and the fact that half of the maze faces towards the harbor definitely adds a false sense of security. The ambiance is excellent, and the scares are at the very least unexpected. 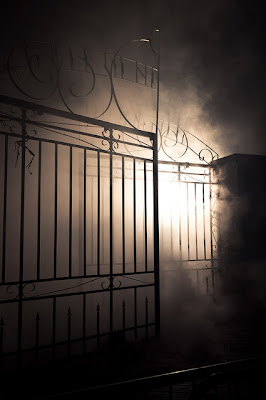 The entrance is located near the still defunct Sci-fi stage area. The entrance resembles a pair of cast iron gates, with a great fog effect behind it. One of the first scares was by two scareactors on bungees. I found this scare highly effective and gives an "out of control" feeling to the maze. Another innovative scare technique is that of the electric sparks, whereby a scareactor seem to give off sparks on a metal grate while guests are walking past.

This maze is overall pretty cool, and is rather innovative for an outdoor maze. 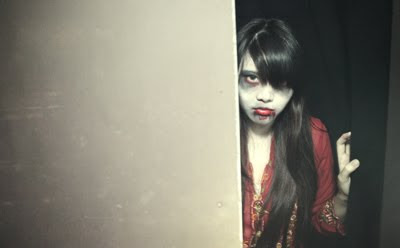 The Vengeance of the Matriarch
Scare Factor 4.5/5
Production quality 4/5
Overall Show 4.5/5
Arguably the most detailed and elaborate section for the entire event, VotM is a solid maze with great show sets and many innovative scare tactics. The story is loosely built around a crazy Peranakan lady inhibiting an old colonial shop house. The story is really very flimsy, but the production quailty made up for it.

While VotM didn’t have the “Hollywood” energy of Post Apocalyptic Rage or the Void, what it did have was creepy classic Halloween cranked up to 11! While scare zones impressed me with the show production, I found the tricks and techniques used to scary me in this one impressive. This haunt was unique and deserved a scare rating of 4.5 as many of the scare techniques are totally unexpected.

The maze entrance is located at the boundary between Hollywood and New York, and the queue winds into the backstage sections of the park, before ending up at a small door leading into a Soundstage. The queue is just some makeshift ropes and is not themed at all, but this is understandable for this temporary event.

Tip
The queue is very long, and can easily bump up to 75 minutes, so it is best to visit this maze at the start of the event.

The maze starts with a full scale facade of a Peranakan Shophouse, complete with balconies and tiled floors. This facade area is generally well lit but still manages to set the eerie feel for the maze. The next area is the welcome room. It is a highly detailed living room, typical of colonial shophouse buildings. The matriarch is sitted on a rocking chair in the middle of the room. The scare here is the fact that there are two mirrors at the two sides of the room, and one of the mirror is slide-able and a scareactor can pop out from behind. This room leads into a portrait room, full of details and amazing period portraits. Some of the portraits were slideable openings for scareactors to appear.

Some other notable rooms include a dining room with a scareactor cannibalizing a human head, while other scareactors jump out from the sides, a walk through wardrobe full of hanging cloths, which gives a highly claustrophobic feel, as well as a room with hanging body bags and a butcher hiding among the bags. These rooms are the common staple of overseas Halloween events, and is great to see these scares coming to Singapore for the local audience here.

The best room in this maze is still the courtyard scene. This scene is very empty on first sight, with minimal decor and lots of space. This really adds to the false sense of security of the place. Out of nowhere, a scareactor on bungee then appears and scares the heck out of guests. The speed and the unpredictability of scare is highly effective and very disorienting.

Overall, this is a great house, and packs a great deal of scares. Given that Halloween is quite new in Asia, this house really pioneers lots of innovative and groundbreaking scare techniques that may be considered as staples in the West.

This is a review of USS's Halloween Horror Nights, an upcharge after hours Halloween event that happens in October.

After a year of false promises, Resorts World at Sentosa finally introduced Halloween Horror Nights to a eager Singaporean audience. The Halloween market has been in rapid development in the past years, with local events such as Sentosa Spooktacular and 13 cells.

General Feelings
I was there for the opening weekend of Halloween Horror Nights. The place was relatively packed for a 60 dollars upcharge event. The majority of the audience was clearly teens and young adults. This event is clearly not suited for kids below age of 12. The atmosphere there was really good, and the Halloween vibe was definitely there. Although it rained during my visit, much of the scare zones are covered and hence my visit was relatively not affected. The production quality was excellent, so were the scare actors. This is a solid event with lots of potential. The scarezones at this event is wicked, and they are really big budget productions. Though the mazes may lack the details of HHN's overseas counterparts, it is still groundbreaking in the Asia scene. However, it is clearly evident that the scale is very small and that they will definitely have to expand for future Halloween Horror Nights. This was a great start, and we hope to see it flourish in the future.

Entrance Plaza
Although Universal Studios Singapore belongs to a much large propoerty, Resorts World Sentosa, the Halloween action is very much concentrated in the park itself. Therefore, the entrance plaza and the surrounding areas are pretty much left untouched, with no decoration or fog. The only apparent Halloween touch is the creepy background music played in place of the usual welcome score.

Tip
The lines can usually get very long during event opening. Be sure to look out for turnstiles will shorter lines, especially those closer to the VIP entrance. The lines also move relatively fast, so don't get impatient. The event usually opens slightly earlier than the stated timing, so be sure to get in line early.

For the following segments, I will rate each scare zone according to its scare factor, production quality and overall show design. 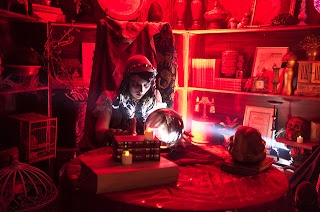 Carn-evil
Scare factor 2/5
Production quality 3/5
Overall show 3/5
The overall most unique and exotic scare zone is definitely Carn-evil. A play off the recurring themes of clowns and scary sideshows, Carn-evil creates a great ambiance and serves as a great introductory zone to the event. It is highly visually stunning, and is heavily fogged, adding to the overall mood. As the zone is covered, the creative team is able to install many theatrical lights onto the covered structure, adding to the production quality of the zone.


This zone starts with the entrance area, with many sinister clowns, some carrying animatronic jack-in-a box props. The clowns are definitely spooky, and adds to the atmosphere. However, they are not aggressive in their scares, and tend to keep mainly to themselves.


Walking down the street, we will see the lady with her mirror, inviting you to take a look at the reflection. This character is definitely twisted, but there is no outright scares here too. Following that are the two sideshow pavilions, one with a tattoo lady and one with a fortune teller. These pavilions/ tents are great photo ops, and the character will definitely interact with you if you are willing (though most people just stop for a photo). There is also a fire-breather and a stilt walking clown. Their performance is a joy to watch, and adds to the sinister, twisted feel of Carn-evil.


Overall, this is a solid scare zone, that is high on atmosphere and mood, but lacks the scares. Great eye candy, and a great place to sit down and people watch.

This is official. After a year long hiatus, USSingapore Blog is finally back, and better than ever. As you can see from the new look of the blog, USSingapore Blog is now in 2.0 mode! In this 2.0 version of the blog, You can look forward to more content, weekly photo updates from the park, detailed trip reports and ride reviews. You can look forward to regular posting, as well as more interaction between you and the blog! Thanks for all the support for version 1.0 of the blog. I really appreciate you taking time to read my articles. To kick start this new season, we will have a 2 part long series dedicated on comparing Battlestar Galatica Human and Cyclone coasters.
Posted by Yilun at 5:05 AM No comments: