This is a consolidated post of the series of articles on Madagascar: A Crate Adventure
General Feelings
This much anticipated ride is an excellent case of anticipointment. After delayed opening for more than a year, this ride finally opens, but with a mediocre ride experience. The scenes are cute, and well constructed, albeit with rather simple animatronics and a lack of excitement. It serves well as a kiddie ride, much along the lines of Small World, and is definitely not an E-ticket. 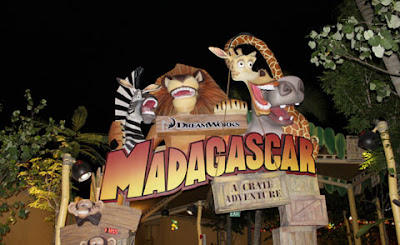 Entrance to the Madagascar ride is located in the Madagascar zone. The pathway leading to the ride is part of the main thoroughfare of the park, and is highly themed with lush vegetation (though fake) right out of the colorful animated forests in the movies. The ride building is covered in a giant facade of the cargo ship from the movies, and dominated the skyline along that side of the park. The entrance 0f the attraction is not directly located at the ship facade, but is instead a distance away, at a small amusement park style entryway with the four characters sculpted on the marquee. The queue is divided into two, one for those with Universal Express, and the other for regular guests. 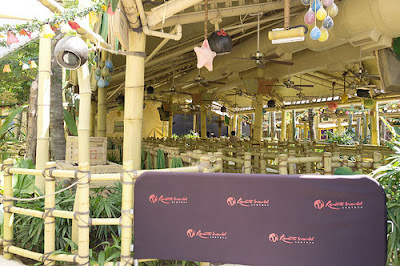 The queue is gigantic. It is located outdoors, covered by a vast canopy. The queue consists mainly of switchbacks, nicely themed as bamboo trunks. This area is kept windy by a crazy ventilation system that makes a heck lot of noise. There are cute light fixtures hanging from the canopy that is reminiscent of the lights that Marty had hanging on his party hut in the first movie. There are also television monitors along the queue that plays news loops reporting on the animals' departure from the New York zoo, in an attempt to fill guests who haven't watched the films on the backstroke. On top of all that, the soundtrack from two of the Madagascar films are also blaring. 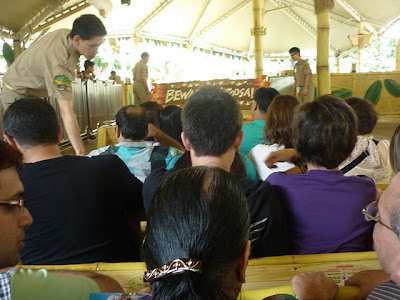 The loading dock is manned by cast members dressed in ranger clothing. The system there consists of two loading spots back to back, with the boarding guests on the left and the exit to the right. Loading is not very efficient, and takes quite a while for the guests to get on and off. The cast is generally cheerful, and can be seen to be working their best to compensate for the inefficiency of the system. 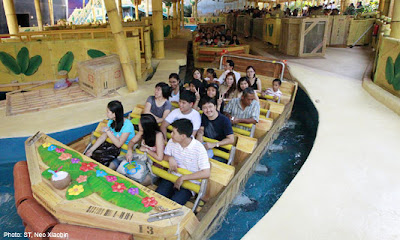 Guests will step into the boat, which is 5 rows long and sits 3 per row. The two seats at the sides doubles up as steps for the guests to step in. There is a redundant lap bar that the cast members have to lower. The boat is themed as a boxy crate, and is painted with bright colors. The boat is floating on the water, and is entirely driven by the currents, with no tracks, no motors etc. Bumpers in the form of rollers are installed at the two sides to prevent the boat from crashing into the walls of the trough.

The Entry
The boat floats lazily through the trough outdoors before slowly making its way to the entry into the show building. The entry is themed as a cut out opening to the ship. A gush of cool air from the air conditioning welcomes the guest.

Scene 1: Cargo storage
The boats enters a utilitarian-like room in a ship, with bolts and nuts clearly visible on the walls, and nautical lights hanging from the ceiling. This room is reminiscent of the ships from the golden days of sea-faring, like the Unicorn in Tin Tin movie. Cargo crates are stacked along the sides. The voices of Alex, Marty, Gloria and Melman emerge from the crates one by one, discussing their situation.
"Hey can you hear me? Its me, its me, Alex!" - Alex "Hey is that you? Talk to me buddy! We're being sent away!" - Marty "What do you mean sent away?" - Gloria

Scene 2: The Bridge
The boats then goes past a illuminated screen with the silhouette of the captain, drinking from his mug. The 3 penguins then emerge and whack the captain unconscious, before taking control of the steering wheel.

Scene 3: The Storm
The boat the goes into another room. A(n animated) porthole offers the guests a view of the choppy seas outside, along with a crate floating on the sea. The room is dimly lit, and to heighten the tension and make the experience more authentic, wind is blown onto the guests and sirens blare.

The boat then floats past two tall stacks of crates. One of the crate stacks suddenly collapses, almost threatening to hit the guests. Effect is achieved by sliding individual crates away from each other. See diagram. 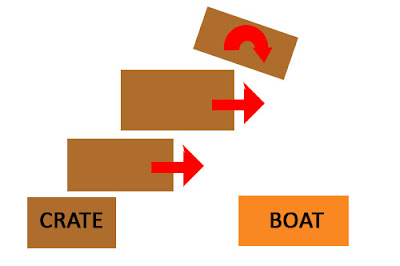 Scene 4: The Beach-up
After the storm, the boats beached up in the calm sunny beaches of Madagascar. Alex is the first character to be seen, breaking out of his crate. One interesting detail is the "days without steak" carving on his crate. Then it is Melman, with his signature complains about his sickness. Gloria then appears, with starfishes covering her essentials. Finally, Marty appears, lounging in his party hut, apparently getting very comfortable in the new environment. One fun thing to do is to look back, and you will see the other side of the cargo ship, as well as a huge anchor in the sand.

"Alright boys, party's over" - Gloria
"This is frak-a-lacking" - Marty

Scene 5: Penguins
In this scene, the 3 penguins are studying the map of Madagascar.

Scene 6: Danger Ahead
This section takes place in a heavily themed jungle section, with low ambient lighting and fog effects. We start with seeing Melman looking at the "Turn Back!(Before it is too late)" sign. Then Marty appears, with half his butt being swallowed by a carnivorous plant. A fun thing to look out for is a hidden "Kuala Lumpur 354km" sign. Then there are more carnivorous plants along the trough, and the soundtrack here is foreboding.

The next section starts with Alex stuck on a spider web, and Marty trying to help him out. We move on to see more spider webs, with spider animations squeaking "How'do you do?" in incrementally higher pitches. We also go past an animatronics crocodile, and see Gloria swing overhead on a snake.

This is also where the entrance to the maintenance dock for the boats are.

In the next scene, we see the monkeys, and they start flinging poo at you, rather unexpectedly. (The poo is actually water)

Scene 7: Move it Move it

At the entrance to this scene is a pair of giant green leaf-like gates, with projections of the silhouette of small animals dancing. The door then opens up to reveal a party in full swing. The lemurs are dancing to the beat.

King Julien informs the "New York Giants" about the foosa attacks, and the gang are determined to fight the foosas. As the boat turns a corner, we see the Mort (the small hamster like creature that got chased by a shark in Madagascar 2) being seasoned by the foosas. 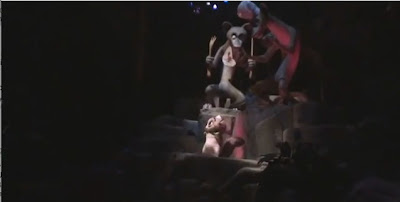 In this scene, we see King Julien planning the foosa attack in front of a giant model and map of Madagascar island. 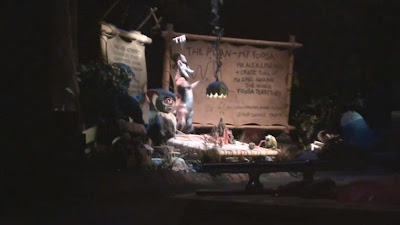 We see King Julien introducing his "Wonderfully camouflaged fighters". Marty is dressed as a trojan horse, Gloria is trying desperately to fit into her overly small outfit. 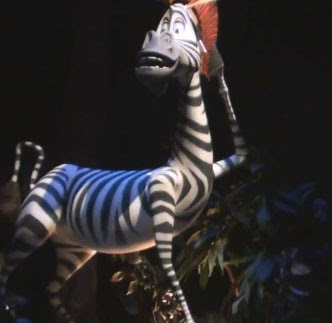 As the boat take a turn, we see the penguins having their own plan. They are preparing explosives to chase away the foosas. 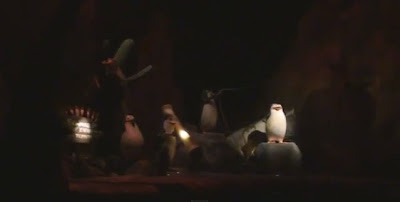 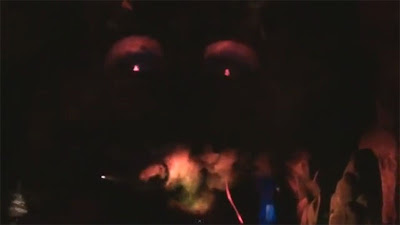 We enter the foosa's volcano through a foosa shaped cave entryway. This is a wonderfully crafted area, with smoke coming out of the mouth, fire in the eyes, and lots of foosa shadows running around the entryway.
This entryway leads into the main room where the gang are fighting the foosas. This takes place in a volcano caldera. Fountains of water are lighted red to mimic boiling lava. Alex is owning the foosas, swing one by the tail, Melman is knocking the Foosas out with his head, and so on.
As we turn the corner, we see the penguins throwing King Julien a bomb. The bomb explodes, and destroys the foosas, leaving a rather smoked King Julien.
At this point, the boat inches nearer to a waterfall that spans the entire boat channel. Just was the "bomb" explodes, the waterfall stops and the boat passes under it. 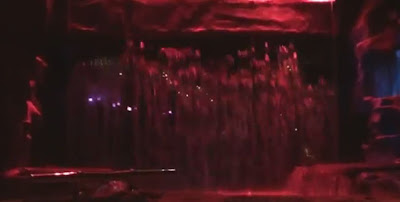 Scene 12: Celebration
In this scene, we see the animals celebrating their victory over the Foosas. We see a giant "Thank you freaks" banner over the boat channel, we see the animals dancing to the music. There are even bubbles being blown at the boat. We see Marty lounging on his chair, sipping drink out of a coconut, and spitting the drink on the guests.
We also see the plane trying to take flight(a scene from Madagascar 2), with smoke coming out of their propellers. The ride ends here, and the boats come out of the show building, back to the loading/ unloading dock.
The guests are then directed into a gift shop where they can purchase their on-ride photos.
Posted by Yilun at 1:00 AM No comments: